The Civil War Bunker stands by the Platja de les Dunes beach in Santa Susanna, and was one of the line of defensive features built by the Republican town councils of the district of Maresme to protect themselves and keep watch over the territory for the aircraft of the Nationalist forces deployed from Majorca to bombard Barcelona during the Spanish Civil War (1936-1939)

The fortification, built on 6 October 1938 by the brigades, is made of reinforced concrete and stands on a stone base. It is entered via a corridor with a small cabinet on the right. The central space has a higher platform, which was the placement for a machine gun. The walls looking out over the Barcelona coastline have two artillery and observation apertures.

The bunker served to protect the population of Santa Susanna from the danger of bombardments, from airborne attacks by the Italian fascist air force, Franco’s ally, as well as potential landings by Franco’s troops. From August 1937 onwards, along the coastline of Maresme and throughout the rest of Spain, the Republican Government and the Popular Army erected substantial defence fortifications. Santa Susanna, then known as Montagut de Mar, had two such fortifications: one larger construction, strategically positioned close to the stream (and which has now been eroded by the sea), along with this bunker at the Platja de les Dunes.

After the Civil War had ended, in the 1940s the Army maintained the structures as observation posts to protect against a potential allied invasion. During the Fifties they became home to families of migrants arriving in Catalonia. They subsequently slipped into oblivion, until in the year 2015 the Culture Department of Santa Susanna Local Council decided to restore the bunker as a historic site.

Of the more than 50 bunkers to be found along the Maresme coastline, Santa Susanna’s is the first to have been afforded BCIL (Cultural Site of Local Interest) status. A recognition that led to the restoration of the structure in late 2008. The work comprised cleaning, adaptation of the space and consolidation of the structure, along with documentation and signage, with the aim of promoting the Civil War Bunker as a historical and tourist site. 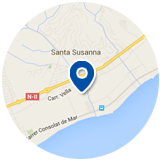